Court Jurisdiction In Family Law and How To Start a Case 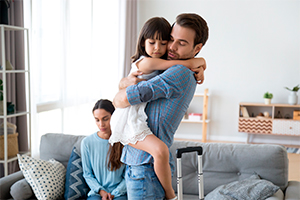 Personal jurisdiction is required in order for a Colorado court to dissolve a marriage, order a party to pay spousal support or maintenance, or divide marital property. A court must also have personal jurisdiction to award attorney’s fees to a requesting party.

What if I can’t find the other party?

Sometimes the other party can not be found. In situations where diligent attempts have been made to have a party served to no avail, service can occur by publication, rather than personal service, and a Court can dissolve a marriage or civil union, however a court is much more limited in what it can award with regards to monetary provisions.

What is the legal standard for dissolution in Colorado?

Colorado, like many other states, has a “no-fault” dissolution legal standard. The “no-fault” standard for Colorado divorce is “irretrievable breakdown of the marriage.” Only one party need assert that the marriage is irretrievably broken to initiate divorce proceedings.

How Do I Start a Dissolution Case?

Once served, generally the person responding, called the “Respondent” has 21 days to answer the petition. If the Respondent does not respond, the original filer, the “Petitioner,” can ask the court to issue a default judgment, which is a judgment issued based only upon the information that the Petitioner has provided. Courts generally are not quick to enter default judgment as they do not afford full due process to the other party and there can be legitimate reasons for a party’s failure to respond within 21 days.

Division of Property and Debts

In a dissolution action the parties often agree to a division of property and debt, or a Court decides the issue. There are two types of property, marital and separate. In a simplistic sense, marital property is that acquired during the marriage and separate property is that acquired prior to marriage or by gift or inheritance to one party. A court can divide marital property, though not separate property.

Consult With An Attorney

If you have questions about dissolution or need assistance in the process, consult with a family law attorney for a full assessment of your rights and responsibilities.