Spousal Maintenance After Remarriage: Changes in Colorado Caselaw After In re Marriage of Cerrone (Colo. App. 2021) 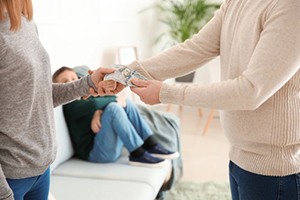 In any Colorado dissolution of marriage, spousal maintenance plays a part in the ex-spouses’ parting of ways. Spousal maintenance, commonly known as “alimony,” “levels the financial playing field” between spouses. Although spousal maintenance can be awarded in a variety of scenarios, a common situation is a marriage where a lower-earning or stay-at-home spouse supported the higher-earning spouse and/or the marital children during the marriage as a homemaker.

Throughout a dissolution of marriage, one of the considerations in awarding spousal maintenance is whether a paying spouse must continue paying a beneficiary spouse after the latter remarries. On this topic, some Colorado Courts previously followed the rule that the “mere presence of a nonmodification clause was, on its own, sufficient.” See In re Marriage of Parsons (Colo. App. 2001). This language meant that some Colorado Courts had been interpreting the law to be that maintenance could not be modified after a beneficiary spouse’s remarriage so long as there was a clause in a Separation Agreement issued as a court order preventing modification.

This was the case in In re Marriage of Cerrone, where the Parties’ Separation Agreement stated, “This Plan shall not be modified except by its own terms or by operation of law or by written agreement of the Parties with approval by the Court” and that “Maintenance shall terminate at the end of the contractual period of 11 ½ years, December 31, 2027. All maintenance outlined herein is contractual in nature and shall be non-modifiable for any reason whatsoever by the Court.”

In this case, Husband was paying Wife spousal maintenance long after she remarried, because the trial court determined that the language in their Separation Agreement stated that their maintenance was non-modifiable regardless of Wife’s change in circumstance. However, when Husband brought the case before a division of the Colorado Court of Appeals, that Court found that Husband’s obligation to pay Wife maintenance terminated upon her remarriage, regardless of the nonmodification clause in their original Separation Agreement.

However, if a Separation Agreement includes a provision that explicitly states that maintenance will continue even after remarriage, then it continues. This is a dramatic change in Colorado family law that will open up the Court for Petitioners seeking redress regarding continued spousal maintenance payments to remarried former spouses.

Here at Janko Family Law, you can expect attorneys with specialized knowledge in divorce law to help you reach your transition goals. We are committed to pursuing settlement to preserve family relations to the maximum extent possible, however also zealously represent your interests in contested litigation if desired or necessary. We can also handle appeals if the event that the trial court errors in fact or law. Give us a call for a complimentary case assessment at 719-344-5523, or fill out our confidential online intake form at www.jankolaw.com.