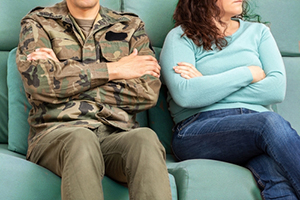 When a military couple dissolves their marriage, it is important to know what benefits a military spouse may be able to receive. Financially separating households is often difficult so military benefits may be of great value to a divorced spouse. A couple may choose to file for legal separation or dissolution in Colorado. Dissolution is more common, however there are times where a couple may choose legal separation for reasons such as religion or the ability to maintain a spouse on medical insurance. Benefits vary according to how the action is filed.

A legally separated spouse is eligible to maintain his or her military identification card and all benefits except that military retirement and Survivor Benefit Plan eligibility is determined at the time that a decree of legal separation is issued. However with dissolution, most spouses, depending on length of marriage, will no longer be able to keep an identification card and will lose most benefits.

Military members who serve for 20 years are eligible for a defined benefit pension, at a monthly payment based upon the member’s years of service, basic pay, and a retirement multiplier. A military pension is a valuable asset. It can be worth anywhere between hundreds of thousands of dollars to more than a million depending on rank at time of retirement and life expectancy.

The pension is considered to be marital property subject to division at the time of the divorce or legal separation. Spousal retirement payments do not begin until the service member actually retires from the military and receives payments, however. If there are at least ten years of marriage overlapping military service, the Defense Finance and Accounting Service (DFAS) will pay the former spouse’s share directly to the former spouse. This is a substantial benefit as the payments are guaranteed and it allows for complete severance of ties between former spouses, if desired.

If the marriage is less than ten years and the pension is divided, the retiree will have to send payment directly each month. Retirement benefits end on the death of the retiree unless the former spouse is a beneficiary under the Survivor Benefit Plan. If a beneficiary, then the former spouse continues to receive compensation for the duration of his or her life, unless he or she remarries.

The military has various pension benefits depending on the year of entry into service and sometimes servicemember election. The military offers a voluntary Thrift Savings Plan, which is a “defined contribution” plan, similar to a 401(k) plan. In the newest Blended Retirement System, the military matches the member's funds and the TSP partially replaces some of the value of the traditional military pension. In the High 3 retirement system, the military did not match contributions. A former spouse can roll over his/her TSP share into a qualifying account, such as a Rollover IRA if the TSP is divided.

After divorce, the former spouse is entitled to the Continued Health Care Benefit Program (CHCBP), for three years. Also if the spouse does not remarry and receives a share of the military retirement or SBP, the former spouse is eligible for the continued medical care indefinitely, though the premium is not necessarily competitive against other medical insurance programs. There are a few exceptions where spouses are entitled to much more affordable post-divorce Tricare medical benefits as follows:

20/20/15 - If there were at least 20 years of marriage and 20 years of service at the time of divorce, and between 15 and 19 years of overlap, the former spouse is entitled to one year of affordable Tricare medical benefits.

A servicemember may transfer educational benefits to a spouse or children under certain circumstances. If the benefit had been transferred to a spouse, that spouse continues to be eligible to use the benefit after dissolution with the member's consent. This access to higher education is a very valuable benefit. It is not a divisible asset in a divorce, however under federal law. While the member may agree to allow a former spouse continued use, a court can not require it. GI Bill benefits partially count as income for the purposes of calculating maintenance & child support. The monthly living expense payment is considered to be income, though the tuition assistance and book payments are not.

Family members may continue to live in military housing for up to 30 days after dissolution.

Each of the branches of the armed forces has a requirement that the military member pay a separated spouse a certain level of support until a court order is obtained. In the Army, for example, the amount due is the national basic allowance for housing rate. This number can be obtained at the DFAS website.

Normally dependent children under age ten are not issued military identification cards, however they are eligible in the event of divorce. The military sponsor must apply by completing Department of Defense Form 1172-2. A non-military parent can access military installations by virtue of the child's identification card as an escort.

Janko Family Law - How We can Assist

Divorce and family law matters are difficult to navigate alone. We can guide you through the experience by handling pleading and motion preparation and filing, negotiation, mediation, and court proceedings for you. This allows you to focus on moving forward to a better future rather than on trying to figure out how the complex court system works. Remember that change often creates new opportunity and a better future. Janko Family Law can help ensure that your best interests and the best interests of your family are protected. Contact us at 719-344-5523, or complete our online form to set up a free thirty-minute informational consultation.