The Uniform Deployed Parents Custody & Visitation Act (UDPCVA) is an act to protect military parents who are deployed in family law parenting matters. Colorado adopted the act in 2013. 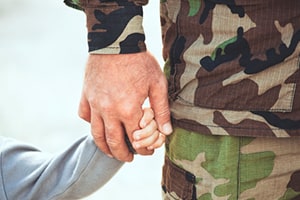 The act provides that a deployment will not change a military parent’s residence for purposes of child custody. This includes parenting time, whether for a majority or minority time parent or for shared parenting. While many other states use the term child custody, in Colorado child custody is called allocation of parental responsibilities and designated time spent with children is called parenting time.

The Act defines a deployment as a mobilization or movement for a period of 90 days to 18 months in a location where family members are not authorized. This could be to a combat zone or an unaccompanied tour, such as a one-year-tour in Korea. A shorter movement is too temporary to qualify, and a longer movement is considered to be a permanent change.

If a custody/parenting time order has been issued, the deploying parent must advise the other parent of the upcoming deployment within 12 days of receiving orders, unless military duties prevent such notice. The parents must exchange proposed parenting plans as soon as possible after notice. If the parents can reach agreement on a parenting plan, then the parties can enter the agreement as a stipulation and ask the Court to issue it as an order.

The Act sets forth parenting plan requirements, which are more detailed than a standard Colorado parenting plan because of the unique military aspects. The plan must:

If the parties can not agree, the Court can decide after both parties submit separate proposed parenting plans. A Court may allow a person who is not a parent to exercise parenting time on behalf of a deployed parent, such as a grandparent or stepparent.

Before the Deployed Parents Act, when one parent deployed, the other parent almost always received full allocation of parental responsibilities for the child(ren). The Deployed Parents Act sets forth procedures for modifying allocation of parental responsibilities and parenting time while the deployed parent is gone, as well as for returning parenting time to the prior arrangement upon the parent's return. These provisions were not set forth specifically for the military population prior to the Act, and because family law is governed by states, there was a wide disparity in rulings upon military deployment.

Are you are looking for a Family Law Attorney who understands the military to include the challenges of deployment and parenting? Contact Janko Family Law for a complimentary case assessment.