The Intersection of Immigration and Family Law 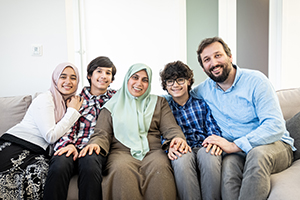 There are many ways in which immigration and family law intersect. One spouse may be a citizen of the United States while the other is not, which can create unique relationship dynamics. The majority of foreign nationals must spend three to five years as a Lawful Permanent Resident (LPR) before application for naturalization. This may put the spouse in a vulnerable position if their path to citizenship is through their spouse. For someone not a citizen or LPR he or she may be subject to deportation. Sometimes the citizen spouse uses the threat of deportation or revocation of sponsorship for citizenship against the other spouse in marital disputes.

It is helpful to have an understanding of the various types of non-citizens present in the United States.

Those who are victims of domestic abuse may apply for citizenship after three years. Generally, sponsorship is necessary for citizenship, however victims of abuse may self-petition and do not require a sponsor. Sometimes applicants who have been abused may be able to receive public assistance or work authorization during the course of the application. Children of an abusive parent may also self-petition or citizenship up to 25 years of age. Abuse does not need to be physical and under the Violence Against Women Act (VAWA), it can include mental cruelty, threats, verbal abuse, controlling behaviors or even threats to use a person’s immigration status against him or her. The abuse must be established by credible evidence, such as police and medical records, protection orders, photos, affidavits, mental health records, shelter records, or counseling records.

The victim must also establish his or her moral character to be eligible for citizenship. Mutual domestic violence may prohibit an applicant from VAWA protection. Applications are confidential and not disclosed outside of the government entities involved in the application. In nonabuse situations, the applicant has a sponsor who agrees to provide financial support if the applicant can or does not support him or herself. Although most applying for naturalization must prove that sufficient financial support is available, such that he or she is not likely to require public assistance, abuse victims are exempt from this requirement.

Is it time to turn change into opportunity? At Janko Family Law we know how to work with you to reach your transition goals. We are committed to pursuing settlement to preserve family relations to the maximum extent possible, however also zealously represent your interests in contested litigation if desired or necessary. We can also handle appeals if the event that the trial court errors in fact or law. Give us a call for a complimentary case assessment at 719-344-5523, or fill out our confidential online intake form.